Text only | Text with Images

If you'd like to discuss this devblog, feel free to do so in the comments thread over on the EVE Online Forums!

As most of you probably already know, the EVE Community is incredibly helpful and supportive of its newer pilots. It's super cool to see how much time and effort some of you put in to help others learn and enjoy the game, whether it's in the rookie help chat, newbie corporations, public fleets, giving them pointers after shooting them in the face or any of the other ways where you reach out to new people and help them with their first steps in EVE.

We are therefore truly happy to be introducing a Help Pointer feature, a tool requested by the community to help you help your less experienced capsuleers :)

To give a little background on this feature, at several EVE meetups in the last few years, various members of the EVE teaching community have asked for the ability to show another player where something is on their screen. While the idea sounded cool, it never really took off, mostly because of the initial griefing and exploit concerns. As it was suggested once again at EVE Vegas last October, an idea started to form of solving this by using in-game links in combination with existing UI pointers from the New Player Experience. We started experimenting with the idea and shortly thereafter it went into production and later this month, we will release this tool to you all on Tranquility.

So what is this tool?

"Ok, you know where you see the current solar system on the left hand side of the screen? Below that it says 'Route', and there is an 'A' icon next to it. Click on that and change the route to 'Shortest'."

"In the Station Services window, which is the window on the right when you are docked, below the Undock button there is a row of icons. One of the icons is a T-shirt. Click on that one to go into Customization to put on your Permaband shirt."

Sound familiar to anyone? If you have ever helped other players in EVE, it's rather likely that you have said something similar in the past. The general idea with this new tool is that instead of trying to describe where to find something, with one simple link you can just point it out to them.

The concept is pretty simple. There is a small window called the Pointer Window (which you can access from the Utilities folder in the Neocom) which lists a collection of commonly used UI elements that the tool can point to. From this window, you can drag any of the elements to chat or any other text field and a simple link with its own color will be created there. When anyone clicks this link, a UI pointer pointing to the corresponding UI element, wherever it is on their screen, will be displayed. The pointer itself is only visible in the EVE client where the link was clicked and it will be visible for 2 seconds.

If they click a link pointing to an element that is not on their screen, they will simply be told that the element is currently not on the screen. The only exception is a link to the Neocom buttons, where it will point to the Necom root and tell them in which folder they can find the button.

It's important to stress that this feature will never give anyone any control over your EVE client. All the other players can do is send you a link. It's not until you manually click the links that a pointer is spawned in your, and only your, EVE client. Not interested in seeing the pointer? Simply don't click the link. Similarly, clicking those pointer links will never activate or click on the UI elements they point to, it will simply show you where on the screen the element is. 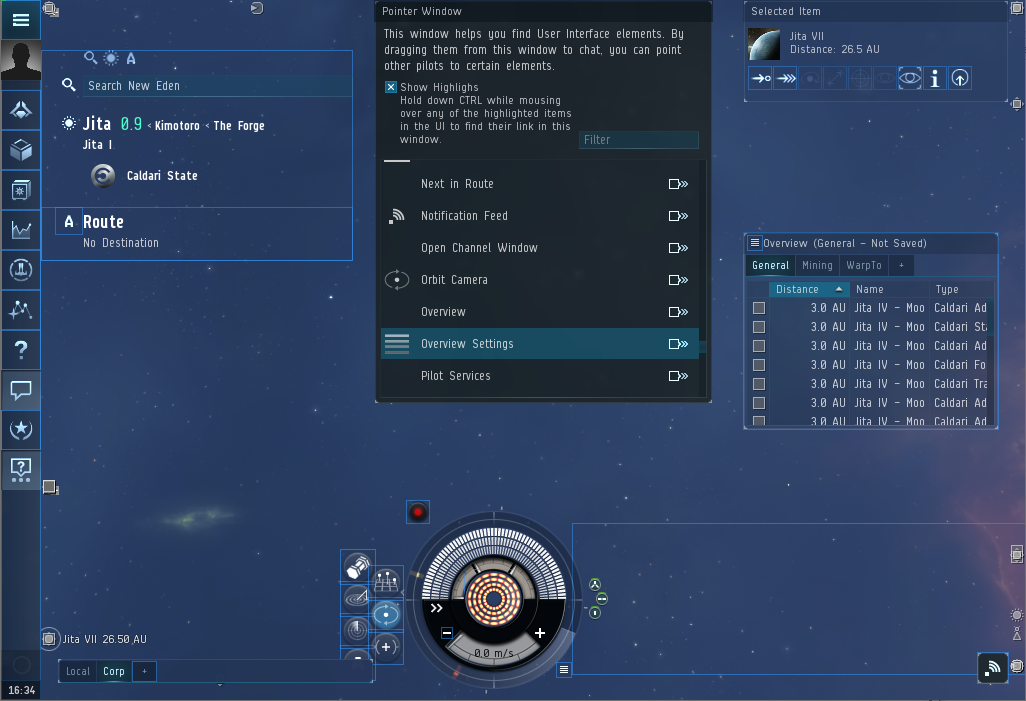 The Pointer Window has a checkbox you can tick, which enables a mode where all the elements you can point to have a blue frame. While in that mode, if you move your mouse over one of them and click CTRL, the corresponding element will be found in the Pointer Window. This is especially handy when you have no idea what the element you want to point to is called.

The pointers have also been added to the newly introduced Universal Search, so any time your search query matches any of the pointers, you will have an extra category listing those pointers. From there you can spawn the pointers on your screen or drag them to text fields to create links, just like from the Pointer Window itself.

The elements that can be pointed to are as follows:


These are the elements we are starting with, but there is nothing preventing us from adding more if there is a need for them. We do not want to go as far as adding pointers for every single minute UI element, but we welcome your feedback if there is something in particular you think would be useful to be able to point to. Please note that this tool is not intended to point you to specific items in space, but rather show you where a feature is found in the UI.

That's all for now, keep being excellent to the newbies (and each other of course)!